The locations are among the most important in trading.  The significant locations include:

However, you can improve the odds of success by counting the waves.  Typically after 1-2-3 formation, it is more likely (not 100%) that the market would turn around at least for a short term. 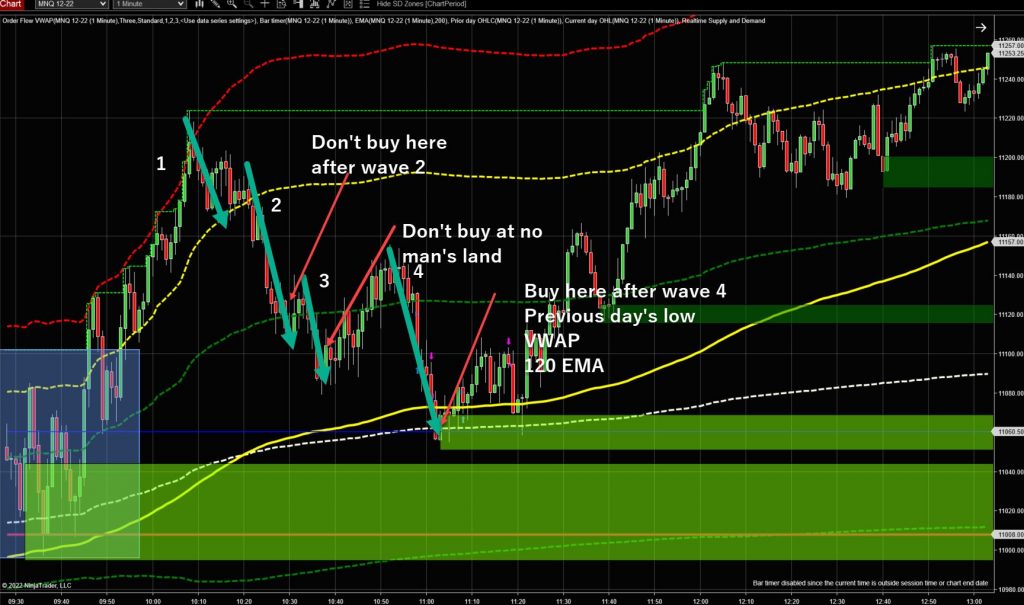 After the market trades +2sigma area, it dipped to +1sigma after wave 2.

Even though +1sigma could be a good support area, it is not a good idea to buy because the wave 3 is not formed.

After wave3 was formed, it rallied back to +1 sigma,  but the wave 3 completed at noman's land between Vwap and +1sigma.  So, it is not a good location to initiate a trade.

Then, the wave 4 was formed at the confluences of different support, VWAP, the previous day's low, 200EMA.  You can take a trade with flip pattern.

The bottom line is: 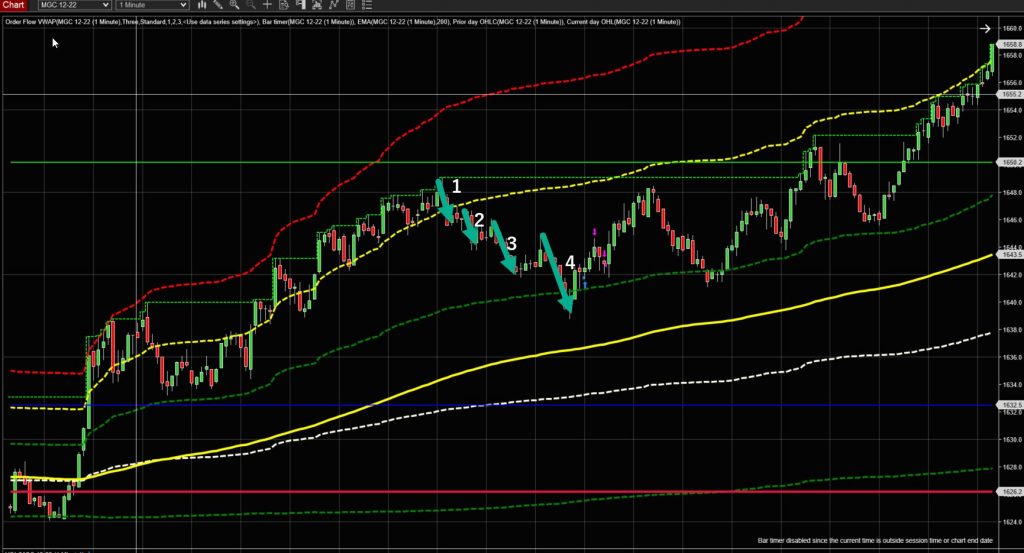 Just like Nasdaq, the gold market trades near +2sigma and sold off to +1Sigma area.  But it is different from Nasdaq chart.

In Nasdaq, when it dipped to +1sigma, only the wave2 was completed.  You should not go long there.

When the wave3 was formed in gold market, the market was in noman's land.

However, in Gold, the wave 4 was completed by the time +1sigmal was reached.  Since at least wave 3 was done there, you can look to go short on flip.

Pay attention to the locations and the wave counts.  If you watch the locations only, you will be likely to get stopped out more often that not. 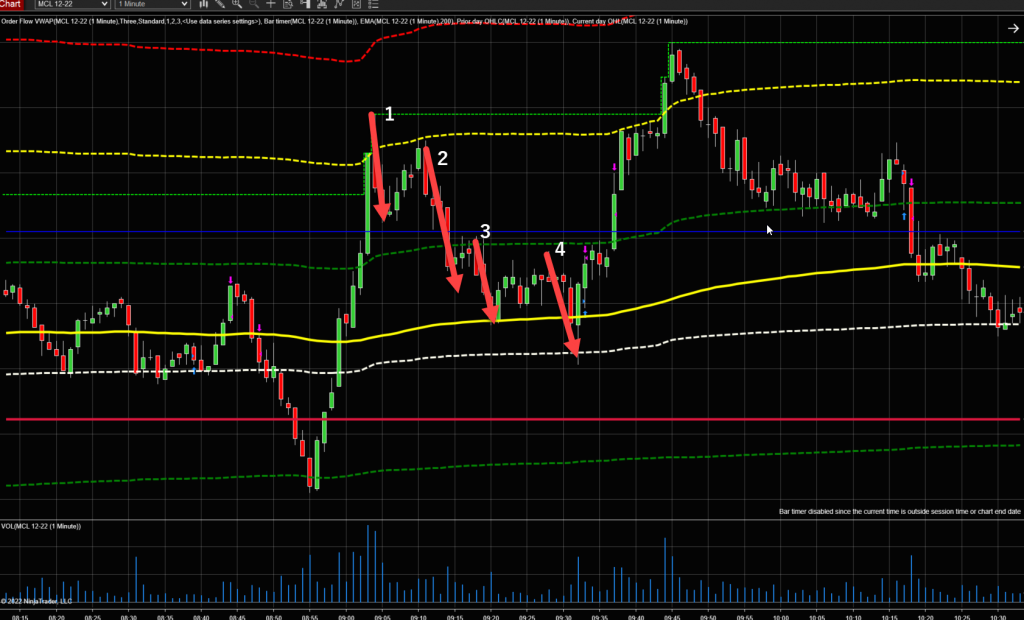 Just like Nasdaq, the crude market reached VWAP after the 4th wave.

The market traded +2sigmal then pullback to +1sigma on the 2nd wave.

The 3rd wave tested 200ema and it didn't form a flip pattern.

The 4th wave reached VWAP and formed a flip pattern.  The trade would have made 2X easily.

It is not just a location that is important, but how it get there is more important.

Always pay attention to the wave counts made to the support and the resistance area. 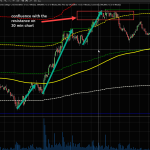 Nasdaq Nasdaq 30 min   The moving averages are flat and the market may be in the balance.   Notice that 50 ema started to trade below 200 ema and the market is below both moving averages. If you looked for a dip to go long in the afternoon, it would have been difficult. Nasdaq 1 min   The market rallied right after the opening. When the market dipped to +sigma1, you could have taken a long position.  But the market gave just 1X. The market dipped to vwap around 12:45.  If you took a long trade, you would not have ... 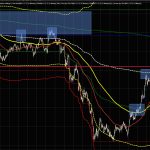 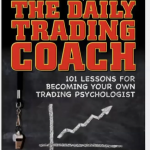 Russel 30 min - Interpretation   The Russel has been trading below both moving averages, that indicate the bearish market. Recently, it broke out to downside from the balance, and it snapped back to the upside.  That is a great reversal and turning bullish.  You can look to go long in 1 min chart. Gold 30 min Chart Interpretation   The market was below two moving averages, that indicated a bearish market.  It reached the 30 min chart resistance area, where you could go short on flip on 1 min chart.   Volume Expansion at the Resistance Trend begins with ... 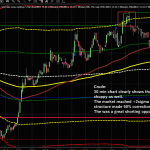 Overall Condition １）Nasdaq Nasdaq101722 on Oct 17 The Nasdaq 30 min chart shows it is bullish. It is above both moving averages. Find the support and enter the market on the flip. ２）Crude Oil   Crude oil is bearish on 30 min chart. You could go short when it rallies back to the resistance areas, such as moving averages, VWAP+2sigma, or Fib 50%+. ３）Gold The gold market is slightly bearish and looks choppy. You can go short or long. Since it is choppy, Fib retracement won't work.  Look for the retracement to moving averages or VWAP.   Today's Trade Nasdaq ... 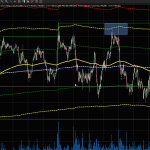 Nasdaq Nasdaq 30 min   Nasdaq rolled over to downside overnight and it was trading below 50ema by the opening.  50ema also started to decline.  Most of the day, the market was trading between 50ema and 200ma.  You can go long or short on this condition.  It is overall bullish and bearish for a short term. Nasdaq 1 min Trade the extreme levels! Around 11am, there was 61% Fib retracement to upside.  The market was rolling down on 30 min chart, so it is good to go short on a rally to extremes.  Go short on a good looking flip ...

PREV
Oct 22, 2022 - Futures Trading
NEXT
Exhaustion Reaction at the Support and Resistance 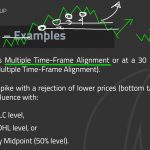 Exhaustion Reaction at the Support and Resistance 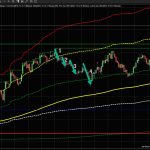